On Friday, July 20th, 1920, The Evening Telegram of Rocky Mount, North Carolina published an article titled, “States Relation of Mill to City.” This article was a full 102 years after the Battle family acquired

the land and founded the mill in what would become Rocky Mount. The article describes the ways in which the Mills made use of various public utilities, including lights, water, sewage systems, and gas. In the context of the pre-Depression era, and the Rocky Mount “gas shortage” of the 1920s, this article provides insight into the operations and finances of the Mills, as led by the Battle family.

According to a Sanborn fire insurance map from 1917, the Mills were powered by electric lighting. As stated by Mr. T. H. Battle in the Evening Telegram article, “we have our own light plant and use it entirely… Our bill to you for lights is about $12.00 a month.” Based on inflation this amount would equate to about $145 per month in 2016. As stated in the article, the use of the $12 was to “turn on current on Sundays for Mr. Huffines’ house power plant.” Mr. Huffines was the secretary-treasurer of the Mills, and also the general manager of the Rocky Mount Insurance and Realty Company. His house was “2 miles north of city,” and subsequently not included on the Sanborn Map. The use of this monthly $12 paid by citizens was thus — at least in part — being used for affairs that were not occurring within the city’s limits.

The mill used the town’s water “for domestic purposes of our operatives on pipe systems furnished by us.”  In other words, the mill built a series of pipes to carry city water to the houses of their employees in the mill village.  But the pipe systems  Battle mentioned in the article connected to a series of sprinklers located throughout the warehouse that were spaced 10 feet by 8 feet apart and ran at a pressure of 50 to 100 lbs in the instance of an emergency. These sprinklers were installed by Grinnell Automatic Sprinklers and were connected to two main water supplies: the primary source of the city main line, and the secondary source of two water tanks that held 11,000 gallons of water each, located on the sides of Towers 2 and 8. (The water in the water tanks came from the Tar River, which is directly adjacent to the factory.) According to the article, the former — the city’s main line access — was a point of contention for townspeople who believed “the local plant should be left outside the city limits.” This is because the mill used “300,000 gallons per month out of the 22,000,000 pumped by” the town on a monthly basis. Battle said this number equated to $33.00 per month, which was the amount charged to Rocky Mount townspeople because of their shared use of these public services. In 2016, this 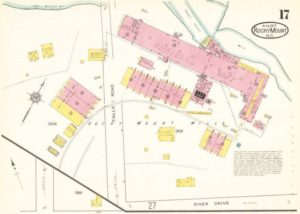 amount would equate to approximately $400 per month.

On the left side of the Sanborn Map, near the cotton warehouse, was the waste warehouse of the Rocky Mount Mills. As mentioned by T. H. Battle in his speech, the mill had its “own purification plant and its own water for mill.” However, some of the water did still come from the city’s main water line. (It is unclear if the water use mentioned in Battle’s earlier calculations is included in this water use or not.) Still, the Mills agreed to let the town of Rocky Mount “use our system for North Rocky Mount not available to present system,” meaning the northern part of the town didn’t have access to public waste systems, so the Rocky Mount Mills let the citizens use their private systems. According to Battle, this served as “a big savings” for townspeople. 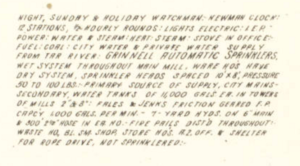 Finally, the description of the use of gas at the Rocky Mount Mills was the most elaborate, probably because Rocky Mount experienced a gas shortage in 1920. In November 1918, the city charter established a business proposition, and made a deal with Rocky Mount Mills: the Mill “would put in all [gas] mains and the city would allow [their] people to use gas, each customer paying by pre-pay quarter meter.” According to Battle, all of the money earned was handed directly over to the city. In 1920, there were “ninety-five customers at the mill out of 1720 using [a combined] 8,690 cubic feet per day out of 225,000 cubic feet.” This amount equated to $350.00 per month, which equates to $4,215 in 2016. The “underground expense” the Mill paid to the city each month (as opposed to the city providing to the mill) “amounts to some $11,000.00,” which equates to about $132,500 in 2016. Based on Mr. Battle’s calculations, the Mill’s customers paid “to the city 25 per cent more than others” who used other gas services. Thus, the city was making a profit off of the gas lines established by the Rocky Mount Mills.

This article was originally written because of the public fear that they were paying for the gas usage by the Rocky Mount Mills; however, it is clear from this article that their wallets were not affected by gas or sewage fees at all, but rather by electricity and water fees. According to the Rocky Mount City Directory of 1920, the estimated population of Rocky Mount was 20,125 people at that time. Based on the calculations of Mr. Battle, that population paid $52 per month in taxes to the city for water and electricity, but nothing for sewage or gas thanks to several deals made between the Mill owners and the city. Although citizens of Rocky Mount questioned the place of the Mill within the city’s limits, the fact that Mr. Battle’s speech to the board of aldermen was published in its entirety within the local newspaper demonstrates the power and influence of the Battle family and their importance in helping establish and run Rocky Mount.