Over spring semester 2018, the Community Histories Workshop partnered with Professor Jordynn Jack (Director of the English M.A. Program in Literature, Medicine, and Culture; and Director of the Health Humanities Lab at UNC Chapel Hill) to introduce students to the world of the nineteenth century insane asylum through the lives of individual patients. 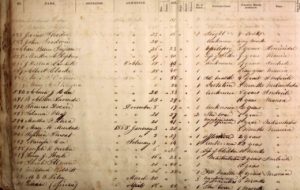 In February, Dani and Sarah met with the class to demonstrate the transcription project the CHW is involved with, which will lead to the creation of the first patient database for a nineteenth century American asylum—more than 7000 records from 1856 to 1917.  Dani leads a team of five undergraduate research fellows, which has transcribed more than 4000 records since January 2018.  Students in the class were each assigned a ledger page to transcribe and add to the project.  Dani and Sarah worked with the class to help decipher nineteenth-century script and translate contemporaneous medical terminology into possible twenty-first century analogs.  “What is phthisis”?  “What were puerperal difficulties?”  (tuberculosis and relating to childbirth, respectively.)

The following class period was devoted to the use of digitized primary source documents in reconstructing the life of a patient listed in the admissions ledger: census enumerations, death certificates, military service records, newspapers, etc.  With this orientation to the hospital records and to digital history, the students dug deeper into the lives of men and women who  had made the journey to “Dix Hill” during and after the Civil War.

Over the next few weeks, Professor Jack and her students followed out some of the many questions raised by the ledgers and primary sources.  A number of the men admitted to the hospital between 1861 and 1865 shared the same “supposed cause” for their insanity: “the war.”  Would we now see this as PTSD?  How did marital relationships play out in relation to the commitment of a spouse?  Was insanity grounds for divorce in the nineteenth century?  Who were the 1865 admissions listed by only first name and a notation: “(African)”?

The class also came up with some fascinating discoveries.  They found what we think is the only instance of a patient’s name being excluded from the admissions ledger.  They were able to identify the patient and shed light on why her name doesn’t appear even in what would have been confidential records at the time.  More on this to come!