For centuries the landscape of Raleigh has been dominated by one feature: what is now called Dorothea Dix Park.  For 150 years the site was a part of the Hunter family plantation, worked by slaves, and a social and political landmark during the colonial and early republican periods.  It is likely that American Indians inhabited this area for centuries prior to European settlement in the 18th century. From 1856 to 2012, “Dix Hill” as it was colloquially known to generations of North Carolinians, was the site of the state’s first and principal insane asylum from 1856 to 2012.  Since 2017 the CHW has worked to recover the material history of this iconic site.  Its discovery of admissions ledgers for the first 60 years of the operation of the hospital has led to the creation of the first comprehensive, searchable database for a nineteenth-century American insane asylum.

We are drawn to this period in large measure because this is where the historical records lead us, in particular recently discovered (and publicly accessible) records in the N.C. State Archives, but also as stories emerge from other archival collections—as close as the UNC Southern Historical Collection and far away as the New York Historical Society.  This period is also exceptionally well documented in digitized primary sources, including more than 3.6 million pages of pre-1923 North Carolina newspapers, Civil War service records, searchable census enumerations and death certificates.  For the first time, we have the ability to recover the lives of some of the people who were thought insane for reasons that ranged from “religious excitement” to the birth or death of a child.

The establishment of state-supported insane asylums in almost every state in the Union by the end of the Antebellum period is critical to the development of “modern” psychiatry.  Asylum superintendents, such as Edward Fisher and Eugene Grissom at Dix, were at the forefront of a movement to professionalize medicine, de-stigmatize mental illness, and understand it as a “disease of the brain.” 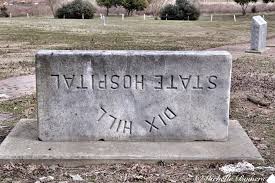 We are not only concerned with those individuals and groups whose presence and voices survive in the historical record, but also those who were excluded and silenced. African American slaves helped to build the asylum, and their children and grandchildren worked there for a century. However, we have records of fewer than a dozen African American patients until desegregation in the 1960s. Many patients who died at the hospital and were buried in its cemetery between 1859 and 1970 were unidentified until the early 1990s.

In parallel with our historical research, we are exploring the ethical and professional issues involved in recovering and making public the identities and experiences of individuals branded as insane—even if they lived and died more than a century ago.  We are also taking our project into the classroom and into the curriculum American Studies and in Health and Humanities.