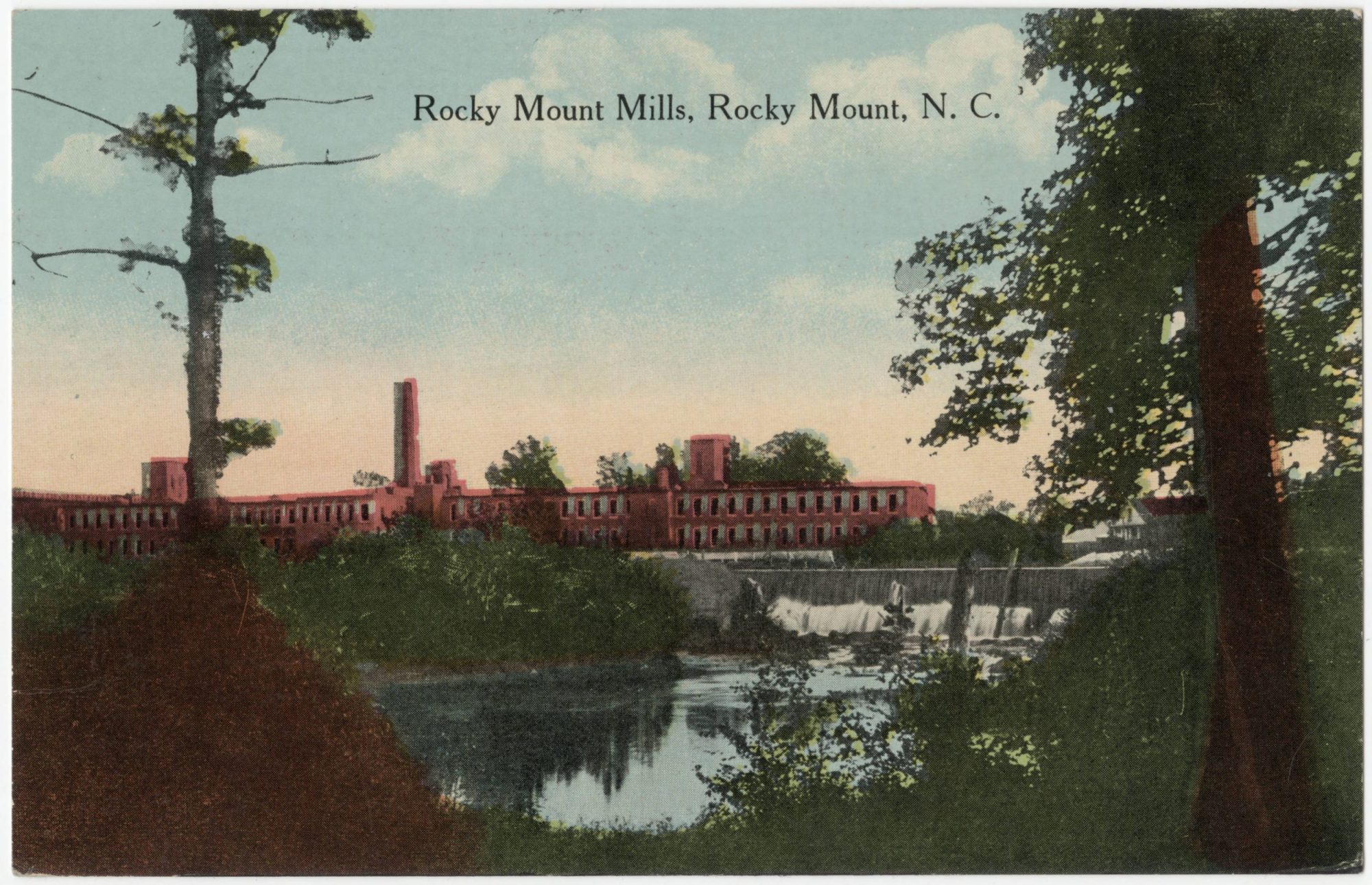 For thousands of years, the falls along the Tar River have been a feature of the land- and waterscape of eastern North Carolina.  For two hundred years the “Great Falls” near what was to become Rocky Mount have been used to power mills.  In 1818 local planter Joel Battle founded a cotton mill on the site, and for the next 178 years it took in raw cotton from the surrounding farms and turned out a wide variety of textile products–from Confederate uniforms to tobacco twine.  The mill was the second oldest and longest operated in the state, and by the 1890s was one of the largest, with some 600 employees.

For at least the first thirty years of its operation, human labor for the Rocky Mount Mills came from slaves and free persons of color.  After the Civil War and rebuilding of the destroyed mill, white men and women and their children formed the workforce, and forged a community in the mill village around it.  African Americans took on segregated mill-work roles in the twentieth century, but throughout the community’s history black labor–whether in the fields, on the loading docks, in the kitchen–was crucial to the economy.

Owned and managed by members of the Battle family for most of its history, the mill was the center of economic, social, and cultural life for generations of Rocky Mount residents.  Cotton mill labor was family labor, and the families lived in houses owned by the mill in the village around it.  By the 1920s, the mill operated a community center, park, laundry, school, and movie theater for its (white) employees, and provided electricity, water, and sewer to the village.   Lots were designed to encourage family gardens.

The mill closed in 1996, but its last manager,  John Mebane, himself a member of the Battle family, was determined that it not be abandoned or demolished.  Capitol Broadcasting Company of Raleigh, N.C., purchased the site, including mill buildings and other industrial structures (300,000 square feet), thirty mill houses, the seven-acre island in the Tar River that had once served as a recreation area, and 30 vacant lots in the mill village–a total of nearly sixty acres.

Capitol Broadcasting is developing the site as a mixed-use campus, with loft-style apartments; retail, commercial, dining, and event space; a craft brewing incubator; community garden; “rails to trails” greenway; riverside walk; and arts maker space for ceramics, woodwork, and metal craft.  Houses in the mill village are being restored for rental.  The complex is scheduled to open in mid-2018.

For the Community Histories Workshop, this is a singular opportunity to bring together multiple units of the university, cultural heritage organizations, community volunteers, and a far-sighted developer to recover the rich history of this place and to make that history a part of the experience of the next generation that will live, work, and play there.

The history of Rocky Mount, the mill, the family who owned it, and the university have been intertwined for two hundred years.  Joel Battle and multiple later members of the Battle family were alumni of the university.  Kemp Plummer Battle was President of the university between 1876 and 1891 and wrote a two-volume history of the university.  John Mebane arranged for the donation of the Rocky Mount Mills papers to the Southern Historical Collection–37,000 items spanning the history of the mill from 1816 to 1996.  The Battle Family papers are also held by the SHC as are those of other families to whom the Battles are related and/or with whom they were associated in business.  The North Carolina Collection Photographic Archives is home to the Charles S. Killebrew Photographic Collection: 470,000 images he made of daily life in Nash and Edgecomb County between 1948 and 1997 as a photographer for the Rocky Mount Evening and Sunday Telegram.  There are also historical newspapers, city directories, census records, and maps accessible through the university library that document the lives of the tens of thousands of families who lived in this area since the eighteenth century.

But there is also another archive of sorts that is just as important and potentially as revealing as that held on library shelves: the memories and stories of people living in the Rocky Mount and the materials that form family archives–photographs, home movies, scrapbooks, mementos.

The challenge, then, and the extraordinary opportunity is to bring together these sources and resources in ways that they can help shape the experience of this historic place–both for the community which “lived” this history as well as for people who may live and play in this place but know little or nothing of its history.

The potential is enormous and the time frame open-ended.  As the workshop’s first project we are partnering with Capitol Broadcasting, several units of the university library, the Braswell Memorial Public Library, and community volunteers to explore two parallel archives: the community-based archive of memories and stories associated with the Rocky Mount Mills, and the institutional archive of documents reflecting the mill’s history.