The following is the first in a series of blog posts from Christina Kochanski, a Community Histories Workshop Undergraduate Fellow who is working on The Red Record project.

Godwin “Buddy” Bush has an incredible story. He survived a lynch mob, escaping his kidnappers and hiding in the woods as mob members and county officials hunted him down. Yet his story was repurposed to promote antilynching legislation. Godwin Bush the person got lost in the attempt to create Godwin Bush the symbol. The lynching attempt occurred in 1947, as lynching’s frequency in North Carolina decreased. Bush’s kidnapping presented an opportunity for legislators to make the final push in officially ending lynching. As the FBI investigated the mob members and Congresswoman Helen Douglas pushed for antilynching laws, Bush himself fell by the wayside. His name disappeared from newspapers within days of the attack. Even as the lynching attempt against him shaped national policy, he became invisible, quietly trying to reconstruct his life. Here, I will try to flesh out Bush’s life; Bush was a living person, not just a statistic or a sym 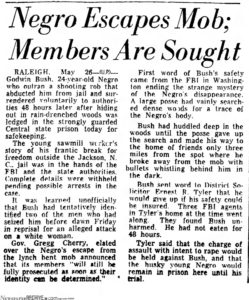 bol for a cause.

Narcissa Bush, wife of Alfred, gave birth to Godwin on May 20, 1925. Godwin lived in Rich Square, North Carolina with his parents and five siblings. In 1945 he married Flossie Alice Hinton, shortly before being drafted in World War II.  He returned from the war to his family in Rich Square and continued his life as a farm laborer. That is, until May 22 1947, when his life changed drastically.

On that night, Bush was sitting in an alleyway waiting for a friend. Dorothy Allen Bryant, an 18-year-old white woman, walked through the alley and almost stepped on Bush. Bryant screamed and Bush, startled, ran away. A few hours later Bush was arrested for attempted rape. Bush spent the night in Jackson Jail until two o’clock in the morning, when a mob of men kidnapped him from the jail. The mob forced him into a car but Bush opened the door and rolled out, dodging bullets as he ran to nearby woods. Bush spent two days hiding before he turned himself in to county officials.

The local, state, and federal governments saw an opportunity. They would not stand for mob violence any longer. The FBI, led by J. Edgar Hoover, launched an investigation and arrested seven men; the jury refused to indict any of those accused. The Department of Justice ruled shortly thereafter that no federal law was involved and the FBI had to abort further investigation. They turned the case over to North Carolina State Solicitor Ernest B. Tyler. Tyler teamed up with Northampton County Sheriff J.C. Stephenson to continue the investigation. Meanwhile, Congresswoman Helen Douglas, a California representative in the House, saw the need for federal antilynching legislation. She was the first white

Representative with African American people on her staff.

These officials focused on national laws while Bush, a man recently kidnapped, shot at, and hunted, struggled to piece his life back together. Bush disappears from newspapers and official records; I am not sure if this is intentional. I can understand the desire to hide after being kidnapped by an angry, racist mob. The attackers still thirsted for their twisted version of justice. Census records show that Bush moved to Albany, New York sometime before 1955. He lived with his wife in Albany and worked as a laborer. In June 1976, Godwin Bush died.

Few lynching victims survive the attacks. For one man to overcome an armed, angry mob of men takes incredible luck, strength, and initiative. Godwin Bush not only survived his attack, he continued to live his life. He kept his family together and started anew in another state. All the while, his lynching made waves in governmental proceedings. Godwin Bush’s name may be missing from his legacy, but his actions surely contributed to the end of lynching in the 20th century South.